Ranking of Isfahan’s historical sites, from the viewpoint of Eastern European tourists, with usage of ADRIADNE method

One of the issues embedded in tourism, is planning for visiting historical places of interest. Due to the time limitations which tourists are usually faced with, they tend to visit places that according to their previous knowledge, render them the most utility. Isfahan has always been popular with tourists. Its historical monuments have hosted masses of tourists in the past and present time, as testified in various travel logs through the history. In this study, it is attempted to set a ranking for Isfahan’s historical sites so that they can be introduced to tourists based on a preplanned schedule. In so doing, Eastern European tourists who had accommodated in the city, were asked their viewpoints on the sites’ ranking. From among Isfahan’s attractions, the Naqsh-e Jahan Square (including the Imam Mosque, Sheikh Lotfollah Mosque, Ali Qapu Palace and Ghaisarieh Bazaar), Si–o–se Pol, Khaju Bridge, Monar Jonban, Hasht Behesht, Vank Cathedral, Chehel Sotoun Palace, Chaharbagh School, Atashgah and Zayanderood were chosen by the respondents. Since Zayanderood is observable when visiting Si–o–se Pol and Khaju Bridge, it was dropped out of the list. Although Chahar Bagh, Hakim Mosque and Atashgah were existent in the preliminary list, they were omitted on account of the tourists’ indifference. Relative unknownity of these three sites, compared to the other ones, was the main reason for this omission. The method of the study is multi-criteria decision making using ARIADNE. ARIADNE method requires upper and lower bounds for the decision making. For obtaining upper and lower bounds for each criterion, the average of numbers presented by the tourists was considered. Then, for each decision choice, one linear programming model with two functions of maximization and minimization was performed. Results suggested the significance order of sites-visiting as the following: Imam Square, Chehel Sotoun, Khaju Bridge, Si–o–se Pol, Vank Cathedral, Monar Jonban, and Hasht Behesht Palace. 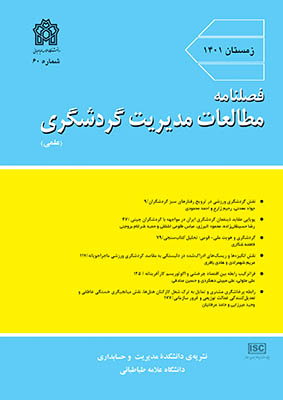